Sy of the Times

IN A TEXTBOOK MEMOIR ON HOW TO REPORT, LEGENDARY INVESTIGATIVE JOURNALIST SEYMOUR HERSH REVEALS HIS METHODS, WALKING US THROUGH HIS BIGGEST SCOOPS AND WORST MISTAKES
Published June 14, 2018 | 5 min read
By Brad Hamilton

Perhaps the most vexing accusation that Donald Trump levels at the media involves his equating honest mistakes in reporting with alleged bias, a desire by the press to spread “fake news” by purposefully publishing inaccurate information.

At least that is a common conclusion among those toiling in a newsroom or broadcast outlet when the president unleashes a torrent of invective over the slightest error or slams unflattering coverage of himself, while personally setting new Oval Office records for lies and distortions.

So it’s encouraging to know that acclaimed investigative reporter Seymour M. Hersh, like all of us, has made some mistakes. (This reporter is certainly not immune.)  Even so, he ranks high among all-time greats in our trade — a relentless tormentor of dishonest White House officials and chronicler of our military’s most heinous excesses.

His drive to get the truth, and the facts straight, cannot be questioned. 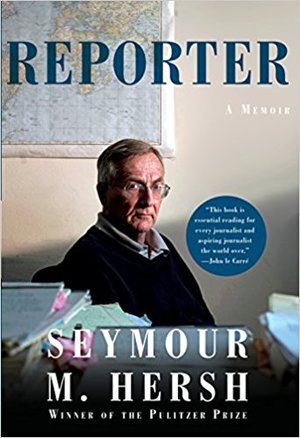 From his Pulitzer-winning expose of the My Lai massacre, to his exclusives on Watergate, the CIA, JFK, Richard Nixon, Henry Kissinger, Abu Ghraib, Dick Cheney and many others, Hersh finds tales that legions of other reporters miss completely.

Yet Hersh admits to flaws and failings in his instructive autobiography, "Reporter: A Memoir," which should be required reading for anyone engaging in this type of work.

If you think your career is threatened by a lawsuit, take heart in Hersh's count: He's been sued for libel seven times.

Of if you've ever done battle with a publishing big shot, hear out Hersh tangling with titans.

After Abe Rosenthal, the editor of the New York Times, had taken a pass on the My Lai exclusive, which Hersh peddled as a freelancer, then put out through a small wire service, Rosenthal called. He'd heard that CBS was going to air an interview with Sy's key witness to the slaughter and asked about sending one of the Times's reporters to interview this ex-soldier.

Hersh curtly cut him off.

"Well, he's somewhere in New York — find him," he told him, then slammed down the phone. The editor of the nation's most influential paper called right back. "Mr. Hersh," Rosenthal yelled, "do you know who I am!"

"Yes," replied Hersh and hung up on him again.

In addition to being prone to temper tantrums and petulent score-settling, Hersh sometimes shied away from important stories, including as a young reporter at the City News Bureau of Chicago, when he overheard two cops talking about the shooting of a robbery suspect.

"So the guy tried to run on you?" one said. "Naw, I told the nigger to beat it and then plugged him." Hersh bolted, uncertain what to do. "It would be my word versus that of all the cops involved, and all would accuse me of lying," he recalls in the book.

"So I left the story alone. I did not try to find and interview the cop who bragged about doing the shooting, nor did I seek out his partner. Nor did I raise hell at City News...It was my shameful, but unavoidable, involvement in what we now call self-censorship."

He would repeat that error years later. And the MeToo movement won't be happy to hear this one.

Shortly after Nixon resigned in disgrace in 1974, Hersh — who by then had patched things up with Rosenthal and was working at the New York Times — got a call from a source connected to a hospital near where the president lived in San Clemente, California. The source said that Nixon's wife Pat had been treated in the ER because her husband had hit her.

"I can say that the person who talked to me had very precise information on the extent of her injuries and the anger of the emergency room physicians who treated her. I had no idea what to do with the information, if anything, but I went along with the old adage from the City News Bureau: 'If your mother says she loves you, check it out.'"

So he called John Ehrlichman, one of Nixon's aides, and he "stunned me by saying that he knew of two previous incidents when Nixon struck his wife."

But, says Hersh, “I did not write the story at that time, and I do not recall telling any of the editors in the Washington bureau about it…All I could say was that at the time I did not — in my ignorance — view the incident as a crime. I should have reported what I knew at the time or, if my doing so would have compromised a source, have made sure that someone else did.”

As you read through the minutiae of his fact-gathering, certain Hersh tenents emerge. His MO? Always be curious, read and research aggressively, work as hard as you possibly can, and never allow fear or the pressure of anyone — an editor, an official, the president of the United States — to stop you from doing what you think is right.

For me the inspiring part of his story is how adaptable Hersh has been throughout his career.

When the Times hired him to head its Watergate coverage — to compete against Bob Woodward and Carl Bernstein on the biggest story in the country — he had virtually no White House sources. He developed them, methodically, often by setting up meetings in person over lunch or dinner.

When David Remnick at the New Yorker put him on the 9/11 attacks, he knew almost nothing about terrorism or Middle East politics. So how did he go from zero to scoop after scoop, including his breaking the Abu Ghraib scandal?

“I began my new assignment by reading as much as I could absorb about the region in a few weeks as well as talking to those I knew inside the U.S. State Department and intelligence community who had served in South Asia; my goal was to get a basic understanding about Afghanistan, Pakistan, and international terrorism.”

Hersh was also ready to fly off at a moment’s notice for face time with well-informed officials. He developed a relationship with Syrian president Bashar Assad, who gave him candid and valuable information. The same was true with Congressional leaders, CIA agents, a foreign general.

Sources in Pakistan told him about the country’s nuclear arsenal.

He got damaging information about General Tommy Franks.

He knew, and reported extensively prior to the U.S. invasion, that Iraq had no weapons of mass destruction.

But through it all, Hersh also could be humbled by the hard work of getting things right.

One of my favorite tales: In 1972, with Hersh riding high on the success of his forthcoming book about My Lai, The New Yorker, under legendary editor William Shawn, excerpted most of the book in two installments, each running more than 25 pages.

“Shawn took no chances of a dumb mistake that could turn an innocent soldier into a murderer. The two articles were fact-checked, line by line, by two experienced young women who essentially moved to Washington for weeks. The process taught me humility, or what passes for humility for me,” Hersh writes.

“I had made many errors, the bulk of which arose when I was summarizing material that had been published or printed elsewhere. I learned from the checkers that every detail — essential or otherwise — matters.”

Words to live by.