JUAN PABLO ANDRADE, WHO HAS CLOSE TIES TO THE TRUMP FAMILY AND IS CONSIDERED A RISING STAR IN THE GOP, IS ALLEGEDLY A MADE MEMBER OF THE GENOVESE CRIME FAMILY AND CURRENTLY UNDER FBI INVESTIGATION.

A White House advisor close to the Trump family has secretly served as a soldier in the Genovese crime family and is currently under FBI investigation for extortion and loan sharking, The Hatch Institute has learned.

Juan Pablo Andrade, 23, is a made member of the largest and most powerful of New York’s five mob families, and the FBI has been shadowing him for weeks, according to a law-enforcement source familiar with the probe.

Agents watched as he met with Genovese capo Danny Pagano outside the Mafia family’s headquarters in the Lower East Side on Oct. 16, the source said. The two huddled inside for 22 minutes, then spoke on the street before parting ways.

The source said Andrade apprenticed with Vincent Asaro, a captain in the Bonanno organization, and is an associate of Johnny Gotti, the grandson of the late godfather who went to jail this year for robbing a bank and torching the car of a driver who cut him off.

It’s unclear if the White House is aware of Andrade’s alleged organized criminal  activities, but the advisor has made no secret of his love for the Mafia, posting photos of himself with gangsters and even having his arms tattooed with “La Cosa Nostra” and “Omerta.”

He’s friendly with the president, with whom he’s conferred privately, dined with Donald Trump Jr and Eric Trump, and attended meetings at the White House and Trump Tower in New York.

Andrade, an avid Trump supporter, joined forces with the president at the launch of his campaign in 2016. He worked for Michael Flynn on national security issues during the transition and was a key member of a Super PAC that’s spent more than $2 million on this year’s mid-term elections.

He was ousted from his position as director with the organization in May after a recording surfaced of him praising Nazis.

On the tape Andrade is heard saying, “the only thing the Nazis didn’t get right was that they didn’t keep fucking going.” Andrade has claimed he was quoting someone else. But three corporate backers, including CVS Health and Dow Chemical, pulled their support. 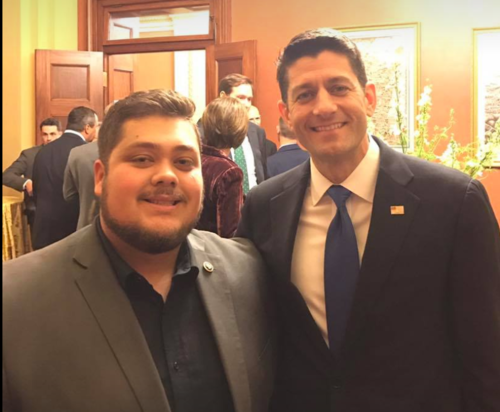 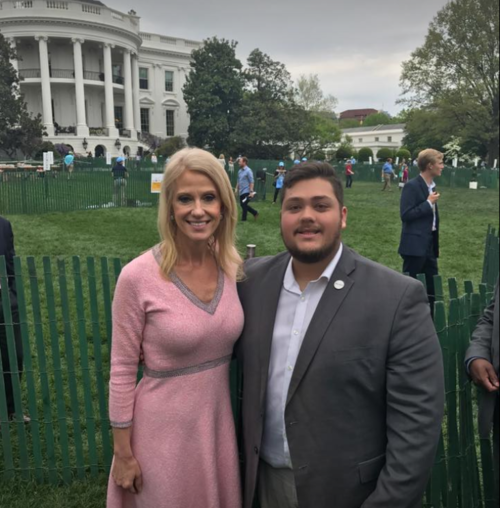 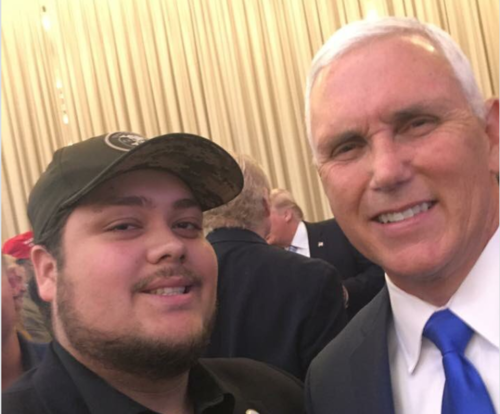 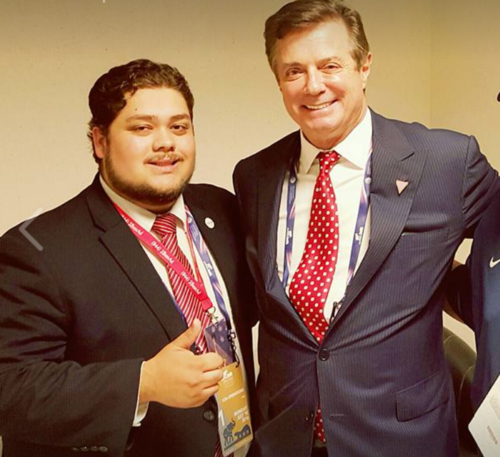 Andrade, a Long Island resident whose father is Sicilian and mother is of Venezuelan descent, is also a member of Donald Trump’s National Hispanic Advisory Council, and serves on the president’s National Diversity Coalition, a group that has come under fire after other members espoused racist views.

“I still keep in touch with people over at the White House,” Andrade told The Hatch Institute.

In January, Newsmax placed him no. 18 among the 30 most influential Republicans under the age of 30.

“This 23-year-old has worked with Trump and the RNC since the 2016 campaign as an advisor,” it said.

The photos he’s posted since 2016 back his standing. There are pictures of himself with Donald Trump and Trump family members, vice president Mike Pence, and many senior officials and lawmakers, including Paul Ryan, John Kelly and Kellyanne Conway. He calls Anthony Scaramucci “my friend.”

He met Donald Trump Jr. and Eric five years ago at a fundraiser for Eric’s foundation at the Trump National Golf Course in Westchester.

“He’s closest with Don Jr. and meets with him somewhat often,” said the law-enforcement source.

And he continues to be welcomed at the White House itself.

Andrade uploaded a video of himself walking near the Oval office on Aug. 27, saying on Twitter that “#Fake News and #Haters will try to stop and silence us, but they can’t. I told you I was back…and business is alright.”

On Oct. 8 he came to the wake of slain Bonanno soldier Sylvester Zottola, and had lunch afterward with the gangster’s son Salvatore, according to the law-enforcement source. 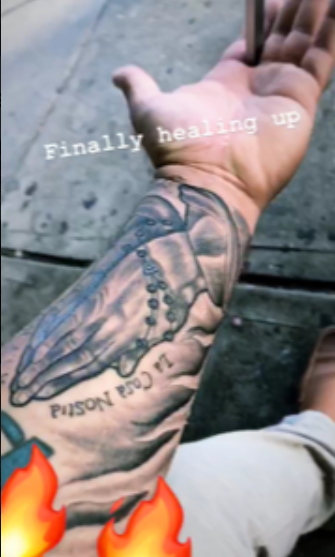 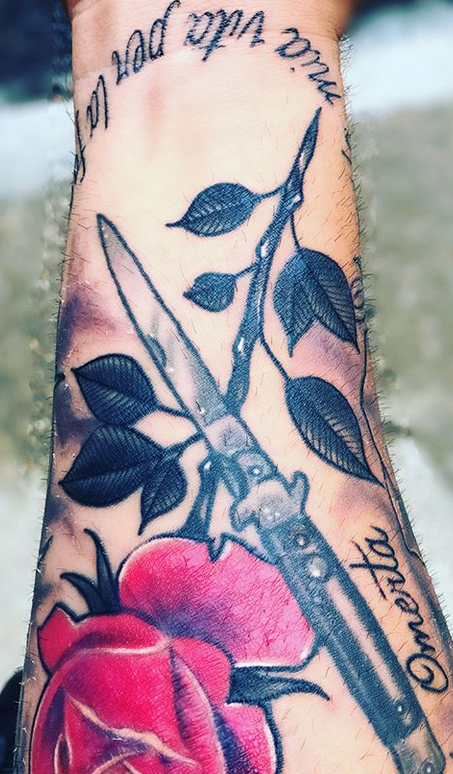 Andrade told The Hatch Institute that he grew up with Johnny Gotti, the Dapper Don’s 24-year-old grandson, and got his tattoos at Gotti’s Rebel Ink parlor in Ozone Park. One, “RIP Noffie,” pays homage to his uncle, Onofrio Macchio, a Genovese soldier who died last year at 85.

He said the La Cosa Nostra tattoo was merely meant to honor his uncle and did not mean to show he himself was a mob member. “I got it as a way to remember him by.”

And his social media pages are filled with shots of him hanging out with wiseguys, including Colombo capo Joey “Cupcakes” Urgitano.

But Andrade claimed he was no Goodfella.

“It’s ridiculous to even think that,” he said. “Do I have some friends with infamous last names? Sure, but in no way shape or form am I involved with that.”

Andrade has no criminal record, though he’s currently facing trial in Nassau County on a misdemeanor charge of filing a false statement with police.

He allegedly lied about a fight he got into on May 11 2018 at 7700 Jericho Turnpike in Woodbury, telling police, “I made up the report because I didn’t want my parents to know I got into a fight.”

The fight was with another mob associate, who slashed Andrade across the face, leaving him with a prominent scar on his left cheek, according to the law-enforcement source. 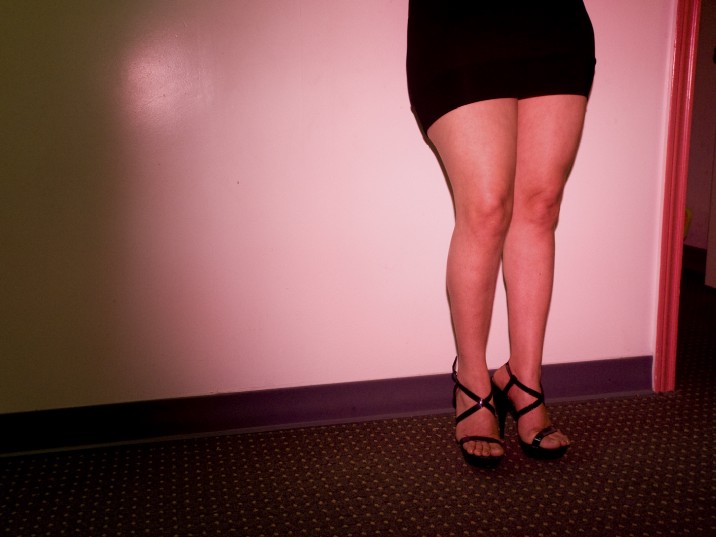